When I think about where I was 11 months ago, and now, I'm honestly surprised.  Shilo might read this, but because it's not really a secret, I figure why not? I wrote some about what's been happening back in September (https://keepcalmanddowhatmerrytellsyou.blogspot.com/2018/09/whats-really-been-going-on.html) and, other than that, I've been pretty quiet.

So let me take you all back a little further. He (my Master) discussed collaring me in mid-July, and at that time, I had a theoretical conversation with both Shilo and Stitch about it.  Probably because Stitch as been around so long, he enthusiastically supported it, and Shilo was much less enthusiastic, but said he was okay with it.

I didn't bring it up with them again, knowing that December was far off, and that would be the soonest my Master and I could go to an event that sold collars, but I had looked at several online, and decided that because I have metal allergies, anodized aluminum chainmail would work best.

In the meantime, there has been some health issues with Shilo, and we have been practicing "The Show Must Go On" mantra. In other words, don't allow situations stop us from living, and we got some answers on the morning of November 30th, and Stitch and myself already had plans to go away that weekend. Me with my Master, him with my Master's wife.  I swear, it's not as kinky as it sounds. So the following day was the event we had been waiting for, and I was presented with what I feel is a lovely collar. 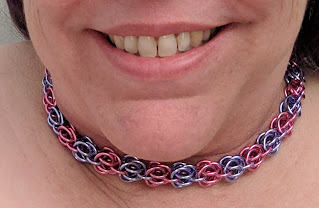 See how happy I look? Well, I realize that Shilo isn't too wild about surprises, so I sent him a more somber looking picture of myself in the collar (Deleted because it was just that ugly) on Sunday morning and he was less than happy about it.  When I came home Sunday night, he was at work, but we managed to have a rational discussion, where I agreed that if it ever bothered him, he would be allowed to remove it, but he must be willing to put it on me whenever I ask. He later told me that his choice was to treat it like a necklace. So far, in the nearly 2 weeks since I've had it, he has not chosen to remove it. I removed it once, about a week ago when I retouched the purple in my hair, and I figured out how to put it back on.

It's loose enough that I don't feel choked by it, and it has just enough weight that I can feel it most days,  Laying on my back is a bit of a problem, because even though it's not tight, it "feels" tight, because the excess goes to the back. It's all in my mind, I know it's not tight, but I will sometimes have a brief moment of panic. So, other than that, life is going on as best as can be expected.

I am also seeing a transgender woman on a casual basis, and we have a rather interesting backstory, but that's for another day.

Merry Contrary
"Mistress Merry's Musings" focuses primarily on my BDSM and Polyamorous relationships. My medical/mental issues might come up from time to time, so I'll toss a few at you:I have sleep disorders.Sleep Apnea, Insomnia and night terrors. My CPAP keeps me alive at night.I have PTSD and phobias and SAD. They affect who I am and how I do things. I have seizures, panic attacks, and a separate personality named Sunshine. She is 7 years old, and is a direct result of childhood abuse. My Therapist and Psychiatrist tell me I'm very "self-aware" and I agree. Sometimes, when things get to be too much for me, I'll retreat, but chocolate and hugs bring me back. ♥♥~~♥♥♥~~♥♥♥~~♥♥♥~~♥♥♥~~♥♥♥~~♥♥ "Accountability is a GOOD Thing" is my latest blog and it will primarily be a day-to-day listing of my thoughts and activities.